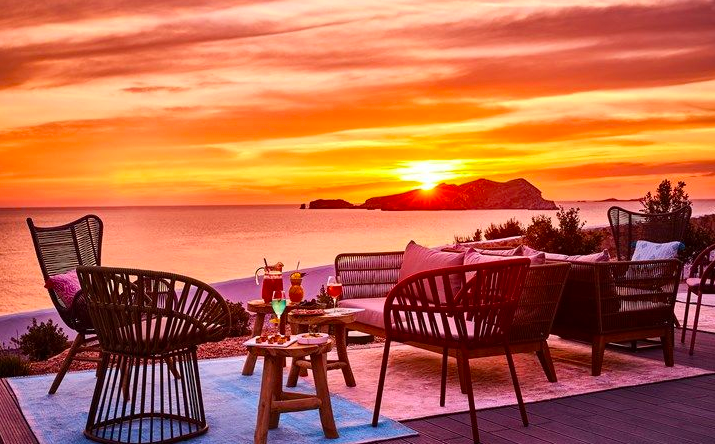 In an exclusive location high on the cliffs, with boundless views of the azure blue sea, we have created a place for you in Ibiza with 7Pines that is so special and perfect that you can concentrate entirely on yourself.In our spacious resort, surrounded by a pine grove, you can enjoy your independence completely undisturbed. Let us inspire you to new experiences. With our first-class service we give you unlimited freedom in your precious time.

7Pines Ibiza is nestled in a pine grove on the cliffs of the west coast of Ibiza between the popular Cala Conta and the secluded Cala Codolar. Our unique view over the sea takes in the rocky island of Es Vedrà. Myths and rumors abide about the island- for some, Es Vedrà is the last visible part of Atlantis, others report UFO appearances. At 7Pines Resort, we believe Es Vedrà has a special healing power that provides absolute relaxation and new energy.

Ibiza is much more than just nightlife. The breathtaking beauty and cultural diversity of the island, combined with our excellent gastronomy, the surrounding nature reserves and our secluded shorelines make 7Pines the perfect place to find balance and to reconnect, with yourself and with loved ones.

Ibiza is part of modern Catholic Spain with a culture largely reflective of that. However, Ibiza's historic isolation and occupation by various ethnic groups, including Moorish and Roman people, has left its mark on the architecture, art and cuisine.

Whilst the official spoken and written language in Spain is Castilian. In Ibiza the official language is Catalan with a regional dialect called Ibicenco or Eivissenc (mainly in Ibiza Town or Eivissa to give it its correct title).

The currency in Ibiza is the Euro (EUR) and you won't be short of things to treat yourself to.

The climate of Ibiza, an island of the Balearics, is typically Mediterranean, with mild, relatively rainy winters and hot, sunny summers, which are also a bit sultry but tempered by sea breezes. The average temperature ranges from 11.5 °C (52.5 °F) in January and February to 24.5 °C (76 °F) in August.